Join the Conversation Recommended Slices A Woman’s Guide to Drinking Beer Lowlifes and Red Flags – 10 Indicators You’re Dealing with a Lowlife Opting for a Platonic Roommate — Why I Did It and Why It’s the Wave Are You a Lark, an Owl, or a Hummingbird? — Take the Quiz to Find Out

The emergence of acts like Bryson Tiller and The Weeknd signals that the state of R&B is in constant transition. This 2017 neo-soul ultimate guide will put hope back into the hearts of the genre’s loyal fans.

Most of us remember when Neo-Soul greats like Erykah Badu, or even Musiq Soulchild, dominated the airwaves.

That neo torch is today carried on by a new generation of singers, many of whom have adopted modern production techniques and influences from other musical genres to create what could be called “Nouveau Neo-Soul”.

Each artist has created their own unique balance of these diverse musical attributes yet still maintaining strong Soul elements within their music.

Here are 7 essential artists you need to know:

Believe it or not, the former urban pop princess of the Knowles family, has claimed a crown of her own. Beginning with the release of her second album Solo-Angel and the St. Hadley Dreams and solidified by her Grammy win this year for Best R&B Performance for “Cranes in the Sky”, she is officially the Queen of Nouveau Neo-Soul.

In line with Afrocentricism’s emphasis on individuality, Solange tries to maintain her self-allegiance with tweets like the one below. But it’s hard to deny her reign. 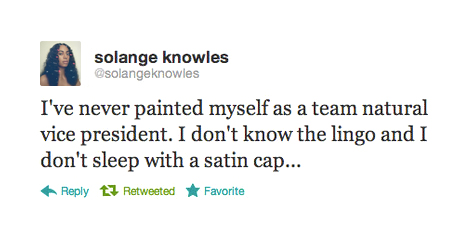 Regardless of whether she intends to or not, Solange embodies the 21st century Black woman’s psyche and train of thought. Seat at the Table is indeed the soundtrack for the current Black feminist movement.

She exquisitely marries body autonomy with the tracks “Don’t Touch My Hair” & “Borderline” while tackling the dichotomy of independence and accepting your biological place as a mother, daughter, sister, spouse in “The Moment”.

Her use of vocal harmonies, funky bass lines and fairly simplistic beats maintains the soulful sound of the album. All while she embraces the current state of music with aggressive features from Lil Wayne and her church musical roots with “F.U.B.U.”.

Quite frankly, I’ve had a default repulsion of everything I’ve heard on the radio pretty much since Soulja Boy hit the scene. (Note: This also kept me from listening to Tory Lanez but his catalogue is fire!)

I expected Ro James to be no different. The gritty, sexy visuals to his hit “Permission” opened my eyes. (Note: This same thing happened with “Bad and Boujee” and now Migos are my guilty pleasure)

By welcoming his raspy voice and modern subject matter i.e. thots, Instagram and Xanax, he could be considered the closest thing this generation has to D’Angelo.

Not only is Ro rolling around in an El Dorado like it’s 1975 but his voice is an ode to soul singers like Marvin Gaye and Al Green. His sexual energy is direct yet patient similar to the way we were all hypnotized by “Untitled (How Does It Feel)” years ago…and still today.

James brings in hip-hop elements with hard, lingering bass lines; a touch of Prince’s rock with emotion-stirring guitar riffs and even house with his use of synths throughout his debut album El Dorado.

Not only does the British crooner have a head-turning look (and rumored to be dating Drake), her voice is just as intriguing.

Written from the POV of the social outcast, her songs enlighten listeners as she exposes life’s raw essence like in “Blue Lights”. She continues this theme with the very contemplative and haunting vocals in “So Lonely”.

The heaviness of her tunes’ content is balanced out with her use of elegant piano chords, like in “Beautiful Little Fools” where she discusses the complexities of living up to society’s standards for women.

Her songs are the expression of a beautiful tormented woman who is on the cusp of getting lost in the concrete jungle, very relatable to many young women. However, Jorja does recognize her erroneous ways, especially with the track “Where Did I Go?”

So, if you ever find yourself wandering through the wilds of life looking for beckons of hope and truth, Jorja Smith is your siren.

This Odd Future affiliate came into most of our lives last summer when their single “Girl”. This band does it all—writing, producing and performing all of their material.

With this comes a certain authenticity that is necessary in soul music.

Each instrument, and its respective player, brings a different layer or voice to the music. Frequently, they use strings creates a certain sensitivity that is balanced out with an almost primitive drum bass line.

From vocalist Syd’s humanistic elements of vulnerability and bravado to the groovy bass lines that carry tracks like “Special Affair”, The Internet’s music has a spirit of teenage angst like grunge rock did in the early 90’s, as told by suburban Black kids.

Though Kendrick Lamar may be leading the troop, the First Lady of TDE stands on her own two feet.

Similar to how Erykah Badu was the edgier of the neo-soul empresses, as compared to a Jill Scott, SZA has inherited that energy of bold femininity. With a voice as large as her hair is, she softens even bangers into soul tracks. See “Teen Spirit”.

The songtress gives us a distinctly African-American perspective on youth. By acknowledging that even though we were raised on the general values of American society, it is still indeed Babylon.

Imagine if Stevie Wonder had love for a funky bass guitar as much as he did the keys. That’s the space that PJ Morton thrives in.

Finally branching out from his band, Maroon 5, PJ’s New Orleans roots give his music has a cruising quality to it (similar to how Currency’s Jet Life was made for a Sunday afternoon drive).

The uplifting vibe “Everything’s Gonna Be Alright” reminds us of the musical influence of the Black church. From biblical scriptures to musical structures on Gumbo, it is apparent that he grew up in and around church.

With a vocal aesthetic similar to BJ the Chicago Kid, PJ creates feel good music that celebrates the black experience and acknowledges the dichotomy of it. In “Claustrophobic”, PJ discusses the feeling of being catch in between worlds on the quest for stardom and for self.

Unbeknownst to many of us, FE’s lead singer, Phonte, is the godfather of a generation of rappers turnt singers. Drake has even openly credited Phonte as his inspiration to use his singing voice more in his music.

Multiple albums and Grammy nominations later, The Foreign Exchange is still recording new music. Their latest release leans heavily towards the group’s “musical director’s”, Nicolay, European musical roots with a very strong EDM-type drum line which is beautifully juxtaposed with a traditional keys-driven R&B hook, like in the video below.

Their 2008 album Leave It All Behind, is a classic in Contemporary R&B, and it’s most popular track “Daykeeper” was nominated for a Grammy under said category. FE are the underrated leaders in this genre.

So, if you’re looking for cues as to the next phase in Neo-Soul, then look no further.

Neo-Soul is about exposing your essence, your truths and, most importantly, those hard-fought truths that the world tried to hide from you.

Just as Neo-Soul took musical leaps from our parent’s soul music, we have to be open-minded about what we call neo-soul.

Even Chaka Khan’s “Ain’t Nobody” had futuristic elements in it with the electric guitar intro.

While paying homage and recognizing neo-soul’s roots is a solid foundation for this generation’s soul singers, a heavy emphasis on nostalgia can hamper the genre’s development.

The signifiers that previous indicted something was neo-soul i.e. soulful piano chords, a strong vocalist, emotionally-salient lyrics and probably an afro, are no longer solely the genre’s defining characteristics. This new generation finds musical sounds, such as 808’s, to be just as soul-speaking.

Ro James is a testimony to the raw sexual spirit that D’Angelo brought us. Bands like The Internet carry the torch that was passed down to them from bands like The Roots.

The essence of the music has not been lost but rather it has transformed with time as musical palettes change and mature.

Nouveau Neo-Soul has done just this. At times, Merging the bass-driven production of hip-hop, with electronic sounds of the EDM trend.

Let’s enjoy the musical evolution as these artists continue the progressive legacy that is necessary to constantly stay true to the pulse of Soul.


In this article: Guide, Neo-Soul, R&B

Abrea is a millennial torn between the nostalgia of handwritten notes and the convenient technology of Bluetooth speakers. At Pace, she is an Associate Editor on the Walmart account. She’s widened her writing repertoire by maintaining a modern art column with the Winston-Salem Journal while also balancing a thriving modeling career. Abrea received her Master’s in Business Management from the Wake Forest University School of Business. While studying for her BA in Spanish from St. John’s University, she completed internships with: Jazz at Lincoln Center, Epic Records and XXL Magazine. She enjoys a good whiskey, writing about incredible people, exceptional music, and life in marvelous and perplexing times.

A Woman’s Guide to Drinking Beer

What is FLAC and Why Will It Change the Way We Listen to Music?